The causes and impacts of global climate change can only be addressed effectively by a concerted international effort. Every country needs to play its part to reduce global concentrations of greenhouse gases (GHGs) and adapt to the impacts of climate change.

As a small low-lying city-state with an open economy, Singapore is particularly vulnerable to the consequence of climate change. We have a deep interest in global efforts to address potential disruptions to natural ecosystems and human societies. Singapore has always been a strong supporter of multilateral approaches to global issues, and we work closely with other countries to tackle the climate challenge.

At the centre of the global effort is the UN Framework Convention on Climate Change (UNFCCC), which sets the framework for governments to cooperate to address climate change, based on the principle of “common but differentiated responsibilities and respective capabilities, in light of different national circumstances”. International negotiations have been ongoing under the UNFCCC since the 1990s to increase international action on climate change.

At Paris in December 2015, Parties to the UNFCCC adopted a landmark global climate agreement. The Paris Agreement will replace the Kyoto Protocol when it expires in 2020 and will require all countries to take action to address climate change. The Paris Agreement reaffirms the commitment by all nations towards the UN multilateral framework to address the challenges of climate change.

Singapore has been an active player in the international climate change negotiations. We ratified the UNFCCC in 1997, and acceded to the Kyoto Protocol in 2006. We further ratified the Doha Amendment to the Kyoto Protocol in 2014. Under the UNFCCC process, we have been, and will continue to work with other parties to advance the international climate change agenda.

Evolution of the UN Framework Convention on Climate Change

IPCC’s First Assessment Report underscored the seriousness of climate change and linked emissions from human activities to the warming of the earth’s surface beyond natural effects.

The draft of the Framework Convention deliberated at the UN Conference on Environment and Development (UNCED) in Rio de Janeiro. The preparatory committee of UNCED and the Main Committee of the Rio meeting was chaired by Singapore’s Ambassador-at-Large Tommy Koh. It lead to the landmark UNFCCC adopted by the United Nations. The framework required governments to develop policies and strategies to reduce greenhouse gas emissions within their national boundaries and adapt to irreversible climate change.

The Convention on Climate Change enjoyed near universal membership, making it one of the most globally supported international agreements under the UN.

The Kyoto Protocol attendees negotiated with 41 developed countries (Annex I Parties) agreeing to binding targets for emissions reductions from 2008 to 2012.

Copenhagen Climate Conference did not reach consensus, but a number of developed and developing countries announced targets on emission reduction efforts up to 2020.

The Durban Platform set out an agreement on a second commitment period of the Kyoto Protocol. There was also agreement to launch negotiations on a new, legally binding, global agreement that would apply to all countries, and come into effect in 2020. The Durban conference also agreed on a package of key decisions, including the setting up of a Green Climate Fund to channel climate-related finance resources for developing countries to reduce emissions and to adapt to climate change.

At the UN Climate Change Conference in Doha, Parties agreed to a new commitment period of eight years under the Kyoto Protocol, agreed a firm timetable to adopt a universal climate agreement by 2015 and agreed a path to raise necessary ambition to respond to climate change. They also endorsed the completion of new institutions and agreed ways and means to deliver scaled-up climate finance and technology to developing countries.

In Warsaw, Poland, the Parties produced a set of decisions including a rulebook for reducing emissions from deforestation and forest degradation and a mechanism to address loss and damage caused by long-term climate change impacts. They also agreed to communicate their respective contributions towards the global climate agreement well in advance of COP-21 in Paris in 2015.

In Lima, Peru, the Parties agreed on various ground rules to guide the submission of their respective contributions towards the global climate agreement.Pledges made by both developed and developing countries prior to and during the COP also took the capitalisation of the new Green Climate Fund (GCF) past an initial $10 billion target.

On 12 December 2015 at the 21st Conference of the Parties to the UNFCCC (COP-21) in Paris, 196 Parties adopted a new climate agreement applicable to all Parties. The Paris Agreement, which will take effect post-2020, aims to hold the increase in global average temperature to well below 2°C, and pursue efforts to limit the temperature increase to 1.5°C. 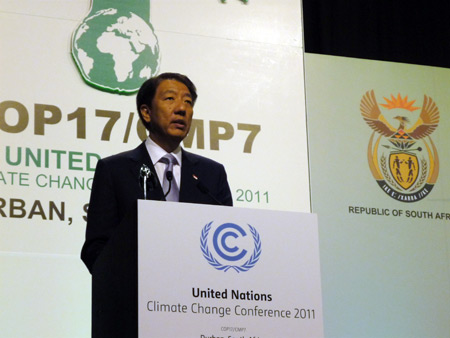 Prior to the UNFCCC Climate Change Conference in Copenhagen in 2009, Singapore pledged to reduce our greenhouse gas emissions by 16 per cent below business-as-usual (BAU) levels in 2020, based on the condition that there should be a legally binding global agreement in which all countries implement their commitments in good faith. In line with the agreement adopted in Paris in December 2015, Singapore has made a further commitment to reduce our Emissions Intensity by 36 per cent from 2005 levels by 2030, and stabilise our greenhouse gas emissions with the aim of peaking around 2030.

This pledge is an ambitious one given our limited access to renewable energy and will require concerted effort by all stakeholders, including the Government, businesses, households and individuals.

We are actively engaged in environmental cooperation through bilateral and regional platforms such as the Sino-Singapore Tianjin Eco-City, the Asia-Pacific Economic Cooperation (APEC) and the Association of Southeast Asian Nations (ASEAN).

Singapore is a partner in key regional initiatives, such as the Sino-Singapore Tianjin Eco-city project with China, and our collaboration with Jambi Province in Indonesia to improve peat land management and promote sustainable land use practices.

We also provide technical assistance and human resource capacity building to climate-related areas through the Singapore Cooperation Programme (SCP). For instance, under the ambit of the SCP, we have established a Small Island Developing States Technical Cooperation Programme that caters to the specific needs of small island developing states, including climate-related issues and challenges. The SCP training courses cover a wide range of topics including sustainable urban development, water management and energy efficiency and emissions reduction.

Singapore actively collaborates with countries such as Japan, Korea, Thailand, France, Germany and Norway in order to leverage our respective strengths and experiences and to provide training to developing countries on climate change and environment-related issues. These initiatives reflect our commitment to sharing our knowledge, experience and expertise with other developing countries to help them implement sustainable environmental and climate policies and practices.

As of December 2015, we have trained over 10,700 developing country officials in climate change-related programmes, and will continue to deepen this effort.

Our participation with the C40 has allowed us to learn from the best practices of other C40 cities in areas such as building energy efficiency, transportation, climate change resilience and adaptation. Singapore has also contributed to C40 by sharing our experiences in urban development and transport infrastructure.

Singapore’s efforts in promoting urban sustainability and addressing climate change were also recognised by C40 in 2013 when it was presented with the C40 City Climate Leadership Award.