Singapore Commits to Achieve Net Zero Emissions by 2050 and to a Revised 2030 Nationally Determined Contribution; Public Sector and Jurong Lake District to Lead The Way with Net Zero Targets

JOINT PRESS RELEASE BY NCCS AND MSE: SINGAPORE COMMITS TO ACHIEVE NET ZERO EMISSIONS BY 2050 AND TO A REVISED 2030 NATIONALLY DETERMINED CONTRIBUTION; PUBLIC SECTOR AND JURONG LAKE DISTRICT TO LEAD THE WAY WITH NET ZERO TARGETS

Singapore will raise our national climate target to achieve “net zero emissions by 2050” as part of our Long-Term Low-Emissions Development Strategy (LEDS). We will also “reduce emissions to around 60 million tonnes of carbon dioxide equivalent (MtCO2e) in 2030 after peaking emissions earlier” as part of our revised 2030 Nationally Determined Contribution (NDC). Singapore will submit these updates to the LEDS and 2030 NDC to the UNFCCC by the end of 2022.

This revision to Singapore’s national climate target builds upon our current LEDS and NDCs, as well as Singapore’s early actions towards sustainable development since independence. In 2009, Singapore had pledged to reduce our emission by 16% below Business-as-Usual (BAU) levels by 2020 ahead of the Copenhagen Summit under the Copenhagen Accord. Singapore has achieved this pledge – our 2020 emissions of 52.8 MtCO2e is equivalent to 32% below our Business-as-Usual (BAU) levels[1], and gives us confidence to raise our climate ambition.

Given that Singapore is an alternative energy disadvantaged island city-state, these targets are contingent on technological advances and the economic viability of low-carbon technologies such as hydrogen and carbon capture, utilisation and storage (CCUS), as well as effective international collaborations in areas such as carbon credits and renewable energy imports. Singapore’s ability to fulfil our pledges, like all Parties, will depend on the continued international commitment by Parties to the Paris Agreement and their climate pledges.

The transition to net zero demands ambitious and collective action. Singapore announced our national hydrogen strategy, which will guide our approach in developing low-carbon hydrogen as a new frontier in our efforts to green our power and industry sectors, as well as contribute to the decarbonisation of international maritime and aviation. To lead the way for Singapore’s decarbonisation journey, the public sector will commit to achieve net zero emissions around 2045 under the GreenGov.SG initiative. This will be contingent on the progress of technologies and international cooperation to enable mitigation measures. Jurong Lake District will also aim to achieve net zero emissions for new developments around 2045. Singapore announced these revised climate targets and plans at the Singapore International Energy Week (SIEW) 2022.

These plans and revised targets build upon the announcement during Budget 2022 of Singapore’s intention to raise our climate ambitions. Since then, under the Singapore Green Plan 2030, the Government has engaged more than 1,700 members of the public and key stakeholders on Singapore’s climate ambition, including a public consultation exercise via REACH in September 2022 (refer to Annexes D1 & D2 for a summary of feedback received). Across these various engagements, respondents agreed with the need for Singapore to increase its climate ambition given the urgent global need to take climate action.

Executing the net zero transition will not be easy for Singapore given our small geographical size and lack of renewable energy resources. However, Singapore has chosen to commit ourselves to these targets because we have a responsibility to carefully steward a sustainable environment for future generations. The public and private sectors, as well as community and individuals, will all have key roles to play in coming together to transform the way we live, work and play in a low-carbon future, and to seize new opportunities in this green transition.

[1] Under Singapore’s Copenhagen pledge, 2020 Business-as-Usual (BAU) emissions level was projected to be around 77.2 MtCO2e. 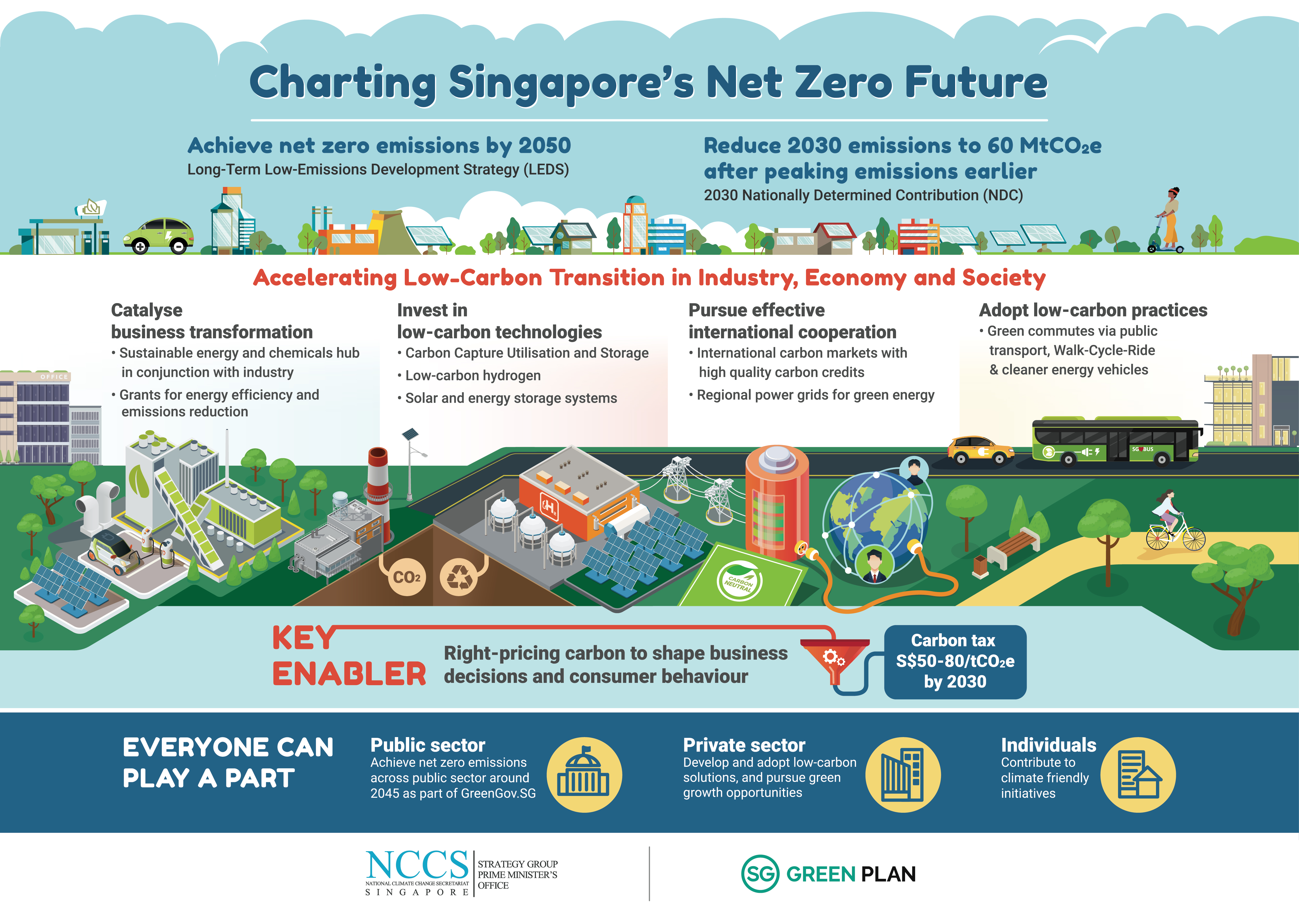 Annex B - Factsheet on GreenGov.SG