From 1 September 2014, NEA will introduce a revised mandatory energy rating system for some types of home appliances, so as to provide more useful information to help consumers make choices that will save energy and save costs.

Under the new, revised rating system, the most efficient models will be awarded five ticks, compared with four in the previous system. Another new feature of the energy label is that it will clearly reflect the annual estimated energy cost of using the product.

With these changes, suppliers will be encouraged to bring in more energy-efficient products, and consumers can look forward to having better energy-efficient home appliances and better identify models which will translate to greater cost savings.

The Mandatory Energy Labelling Scheme (MELS) was first introduced in 2008 for air-conditioners and refrigerators with a five-band tick rating system (i.e. no ticks to four ticks) to help consumers quickly identify the more energy efficient appliances. At that time, there was a spread of products across the five efficiency bands for the various appliance types.

Over the years, the energy performance of appliances offered in the market has improved. This was due to greater consumer demand for more energy efficient products, aided by the MELS; and technological developments that make more energy-efficient appliances possible. MELS replaced a voluntary labelling scheme that was put in place in 2002. NEA was also able to raise energy performance for appliances such as air-conditioners and refrigerators through its Minimum Energy Performance Standards (MEPS) initiative by disallowing the less energy efficient options to be sold in the Singapore market.

Today, about 500 refrigerator models and 300 air-conditioner models are categorised into just two energy efficiency bands in the existing energy rating scale (i.e. three-ticks and four-ticks). This means there is currently a wide range of models with differing levels of energy efficiency within one particular band, and there is not enough information to help consumers differentiate their energy performance further. For example, within the four-tick band, the most efficient air-conditioner models are almost 50 per cent more efficient than the borderline models in that band. While the existing rating system served its purpose to drive up energy performance standards and help consumers distinguish among the models available some years ago, today it is no longer as effective. It is therefore necessary to revise the rating system in order to help consumers better identify the more energy efficient models.

NEA has introduced a revised energy rating system for air-conditioners, refrigerators and clothes dryers to replace the current rating system [1]. Under the revised system, there will be five efficiency bands for air-conditioners and clothes dryers (one to five ticks), and four for refrigerators (one to four ticks). As the current registered refrigerator models do not comply with the requirements of the revised four-tick and five-tick levels, a fifth tick band will not be introduced yet.

The current no-ticks band will be replaced by one-tick as the lowest efficiency band. This is due to consumer feedback that a no-tick band was confusing. The revised one-tick band will be pegged to the current Minimum Energy Performance Standard (MEPS) level. The highest bands have been set at levels that correspond to the highest equivalent bands in developed countries such as the European Union.

Although the energy performance of the appliances has not changed, with the revision, many four-tick appliances under the old energy rating system will be assigned ratings of two or three-ticks under the revised system. The revised energy ratings for all registered appliances can be found at the following NEA website: https://www.nea.gov.sg/our-services/climate-change-energy-efficiency/energy-efficiency/household-sector/the-energy-label

Currently only a few models available in Singapore are within the high efficiency bands of the revised system. But as consumer demand for better energy-efficient appliances grows, we can expect suppliers to bring in more models that will receive high-efficiency ratings. Consumers can then enjoy greater choice and more cost savings.

The revised label will show the annual energy cost of using the product for a typical household. The annual energy cost is estimated based on an assumed electricity price [2], typical household usage of an appliance and the energy consumption of the appliance. This will help consumers better understand how the energy performance of the appliance they buy will translate into cost savings.

[1] The current rating system was introduced in 2008 for air-conditioners and refrigerators, and 2009 for clothes dryers.

[2] The fixed electricity price used to estimate the annual energy cost is based on the average electricity tariff between 2009 and 2013. 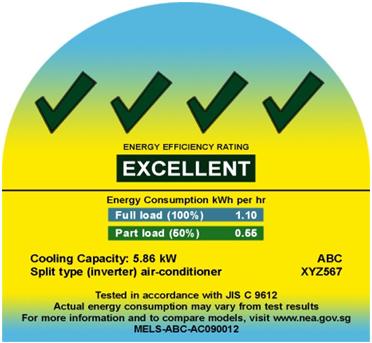 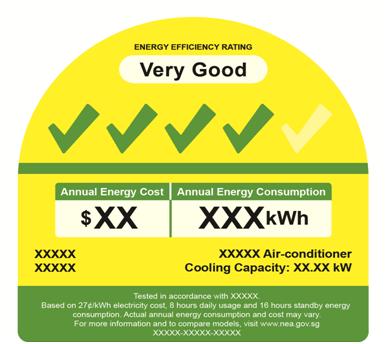