As announced by Deputy Prime Minister and Minister for Finance Tharman Shanmugaratnam in the 2015 Budget Statement, the Carbon Emissions-Based Vehicle Scheme (CEVS) will be revised for all new cars, taxis and newly imported used cars registered with effect from 1 July 2015.

As taxis generally clock higher mileage than cars, the revised CEVS rebate and surcharge for taxis will be higher by 50 per cent to encourage taxi companies to adopt lower carbon emission models for their fleet.

The revised rebates and surcharges for the respective CEVS bands are as follows: 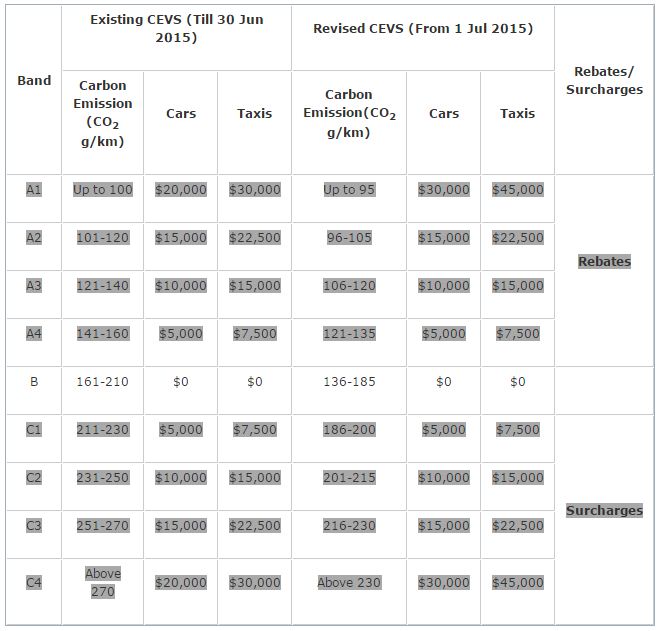 The revised CEVS will be applicable from 1 July 2015 to 30 June 2017, after which it will be subject to further review.

[1] Carbon emissions refer to the release of carbon dioxide from the use of a vehicle and provide a good indicator of the amount of fuel the vehicle uses. The g CO2 /km is a measure that quantifies the weight of carbon dioxide (CO2) released for every kilometre that the vehicle is driven i.e. the vehicle’s fuel efficiency. The more CO2 released over the same distance means more fuel is being used.

[2] CEVS rebate is subject to a minimum ARF payable of $5,000 as cars that have relatively low ARF payable and are already fuel-efficient do not need to be further incentivised.